Published on In
Charity Public Appearances The Honest Company

Jessica was a key speaker and presenter at the event, presenting CEO Brian Lee with his Impact award.

Jessica spoke about The Honest Company on stage and her relationship with CEO Brian Lee.  “He [Lee] would be the first and only person that was truly capable of seeing it through. He made my vision [The Honest Company] into a sustainable business that would change the way people approach their everyday needs.” 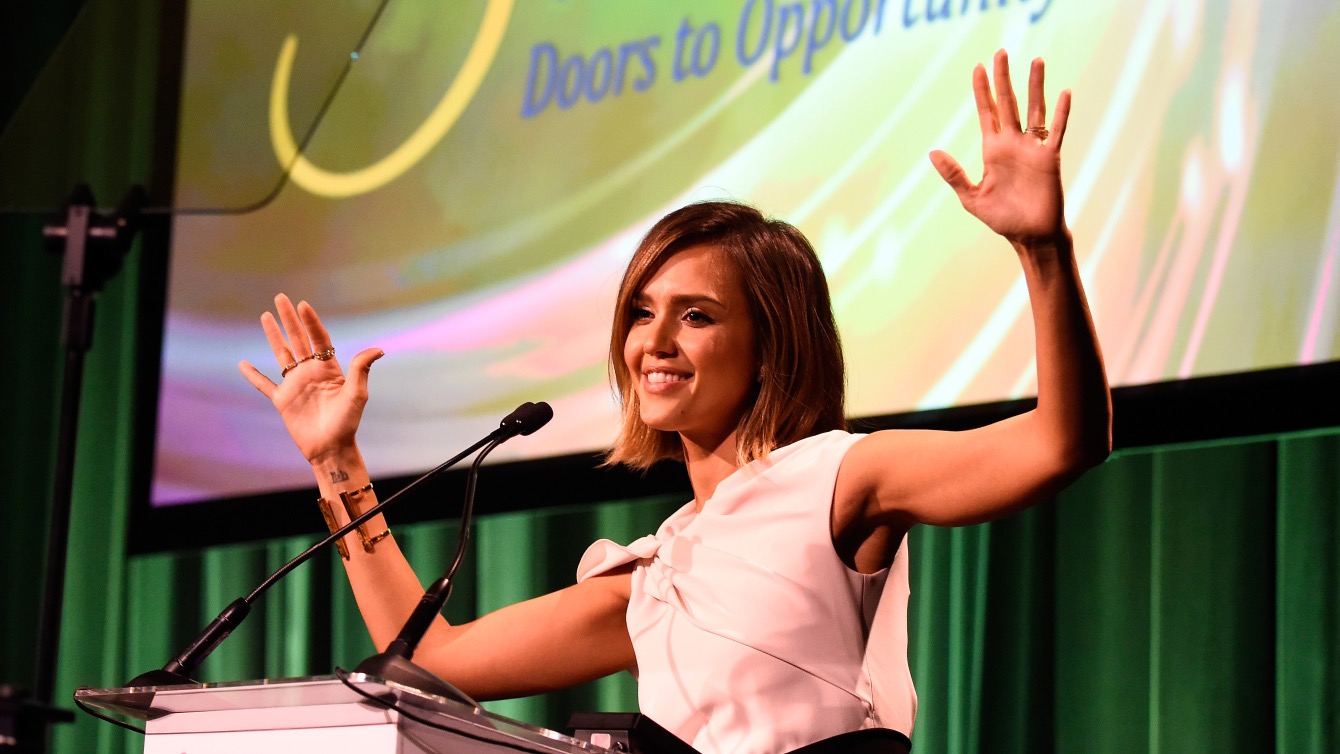 ENG: Jessica Alba looked stunning last night (February 03) as she attended ‘The Launch of Jennifer Meyer XO.’ The event celebrated the collection of beautiful necklaces designed by jewelry designer Jennifer Meyer and Jessica Alba to benefit RED, a charity that raises money in the private sector to fund research to combat AIDS. (more images from the event can be found here:  http://jessicaalba.net/gallery/index.php?cat=229)

Jessica Alba and The Honest Company hosted a Baby2Baby Holiday Party presented on Saturday (December 13) in Los Angeles. Jessica Alba was joined at the event by Drew Barrymore, Busy Philipps, Marc Silverstein, Rebecca Gayheart and Eric Dane. Jessica‘s husband Cash Warren was also in attendance with their daughters Honor and Haven as was Jessica’s close friend Jessica Capshaw and her family.

Jessica Alba at the Baby2Baby’s We Love Moms Party

Jessica Alba attends the Baby2Baby’s We Love Moms Party Presented by The Honest Company at Baby2Baby Headquarters on May 9, 2014 in Los Angeles, California. For more information, head over to baby2baby.org.

Baby2Baby focuses on supplying L.A. families in need with essential baby gear and clothing for their children up to age 12.

No comments
Published on In
Charity Gallery Updates Public Appearances

Jessica is wearing a Valentino Dress, Harry Winston jewels, and a Roger Vivier clutch. Click on the previews above to view more photos.

No comments
Published on In
Candids Charity Gallery Updates

Jessica Alba and Honor were photographed arriving at the Baby2baby offices in Los Angeles on Tuesday (September 18, 2012) where they dropped off donations.  Click on the previews above to view more photos.

Jessica recently spoke to People at the Women Doing Good Awards about teaching her daughters about the benefits of giving back.

“I talk to Honor about not wasting and recycling. I talk to her about having so many things and that there are children out there who don’t have what she has,” Alba, 31, told PEOPLE at Self magazine‘s Women Doing Good Awards on Wednesday.

“So when she is done playing with something or outgrows something,” she continues, “it goes to a baby who doesn’t have it.”

“Honor is just running her mouth about her observations on the world, and her desire to be a doctor mermaid,” Alba shares, adding Haven has been hitting a few milestones of her own lately.

“I think Haven will be walking soon and every day she is saying a new word — right now it’s hot,” she says.

From her acting — she will next appear in A.C.O.D. — to running her eco-friendly company, Alba is a strong believer in staying organized — but admits even the best laid plans can go awry.

“I am really into schedules. It helps me stay sane,” she says. “You will never be perfect so just trying to take it one day at a time, do as much as you can and live in the moment.”

Jessica Alba looked amazing as per usual at the 3rd Annual Diane Von Furstenberg Awards held at United Nations in NY last night. Click on the image above to view more photos.

thanks to my lovelies Jen Atkin n Lauren Andersen for purrrrtying me up for the Tina Brown and Diane von Furstenberg host The DVF Awards, a celebration dinner to recognize and support women who are using their leadership, courage and strength to transform the lives of other women. The four nominees are Panmela Castro (Rede Nami), Jaycee Dugard (The JAYC Foundation, Inc.), Layli Miller-Muro (Tahiri…h Justice Center), and Chouchou Namegabe (Association des Femmes des Médias du Sud Kivu). Honorees receive $50,000 from the Diller-von Furstenberg Family Foundation in support of their organization (U.S. 501c3) to further their work. Oprah Winfrey will be honored with The Lifetime Leadership Award, which is given annually to an individual who has dedicated her entire life and body of work to instilling in other women the courage to fight, the power to survive and the leadership to inspire. – Jessica Alba  (Facebook).

No comments
Published on In
Charity Gallery Updates Photoshoots

Jessica Alba in The Beauty Book for Brain Cancer

Jessica Alba was featured in photographer Darren Tieste’s The Beauty Book for Brain Cancer released last year, and some of the pictures have just made their way online.

“The Beauty Book is a hard cover coffee table book with images of your favorite celebrities, musicians and top models. All the monies raised, will go directly to Brain Cancer via two charities called SNOG & HEADRUSH. These charitable organizations are non- profit and both rely on donations for research”. For more information visit thebeautybook.org. Click on the previews above to view more.