Jessica made a new movie with Jason Statham. This is a sequel to Mechanic. Recently, the trailer for the movie appeared, as well as some stillsky and posters. I added the photos to the gallery so you can check them out. :)

2 Comments
Published on In
Film & Television

And here it is, the trailer of the movie The Veil , in which Jessica starred with Lily Rabe , saw the light of day . The premiere should be sometime in February , so I suppose there will be a spectacular premiere with photos and so on and so on, but who knows, it was not so for some films and they went silently and so disappeared. So let’s see if we can see the premiere. After watching the trailer, I thought wow it is really scary. I don’t think it will be a movie for those extremely weak characters. There will probably be a lot of scary scenes and stuff.

The story takes place 25 years after a mass suicide by a charismatic sect leader (Thomas Jane) and follows the story of a survivor (Lily Rabe) who goes to the director (Jessica Alba) to find out what really happened that day. What they find goes beyond cult behavior and ultimately translates into the supernatural.

We’ll see how successful the movie is, but I think it won’t be that bad again.

Barely Lethal  has been mentioned a long time ago. It wasn’t good to see the premiere photos, but that probably meant it was quiet, with the actors and the director and the crew. The film should discuss that young girl Megan (Hailee Steinfeld) has never known her parents and all she knows are the walls of a special school for orphans. Sixteen-year-old Megan is a trained murderer, and the desire for a normal life forces her to pretend to die and enroll in high school. But in the end he finds that being normal is not that easy. That was a brief summary of the film, so let’s see maybe hopefully it will be on DVD soon. Click thumbnails to get 3 photos from the movie .

SOME KIND OF BEAUTIFUL

The movie I thought was going to be called “How to Make Love Like an Englisham” would eventually be called “Some Kind of Beautiful” . Here is the movie poster, click to get bigger version. I will soon add a higher quality to the gallery.

How to Make Love Live an Englishman.

Jessica filmed “How to Make Love Like an Englisham” 2 years ago, which should have its premiere in the next few days, but who knows, because much information about the premiere has not appeared yet. Someone already thought the movie was already, some did not. On the other hand, there are now things for the movie, which means trailer, stillsky and poster, so it all looks like it will be premiered this year, but as I will see (on Wikipedia they say AFM / American Film Market / premiere 6). November, and November 4 was the premiere in Denmark). Personally, I am quite curious about the movie because Jessica played there with Pierce Brosnanen (an older actor, but it’s my heartfelt affair). What is it about? Pierce Brosnan plays a college teacher who meets a perfect woman. But there is one big catch, and that this woman is the sister of a student he brought to another state. Salma Hayek took on the role of sister.

Mark Wahlberg shared the new official trailer for his highly anticipated Entourage flick and every celeb imaginable including himself makes an appearance in the over-the-top movie.

The upcoming film, which is based on the HBO series, follows Adrian Grenier’s character Vince, who apparently has become more ambitious, and is now attempting to navigate his own future by directing his own film alongside Jeremy Piven’s character Ari.

While fans are given an update on the lives of E (Kevin Connolly), Turtle (Jerry Ferrara), and Drama (Kevin Dillon), it’s hard to focus on the main characters as the trailer also features 17 celebrity cameos, including Pharrell Williams, Tom Brady, Liam Neeson, Calvin Harris, and Jessica Alba. (Via us magazine)

Jessica’s cameo is based around an awkward meeting between her and Sara, when Sara runs into Jessica during lunch with a friend and Jessica doesn’t recognize her, and awkwardness ensues from there. If you missed the ep you can watch it online here.

Barely Famous, Wednesdays at 9:30pm on VH1 or online here.

Jessica Alba made a guest appearance this week as a judge on RuPaul’s Drag Race. (Season 7, Ep4) Other guest judges included Lucian Piane and Ross Matthews. 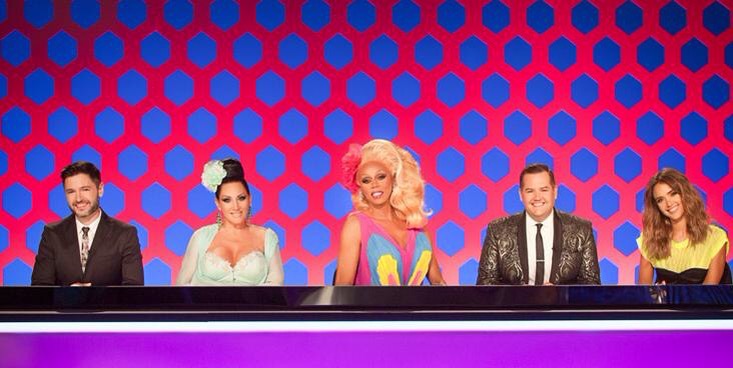 No comments
Published on In
Film & Television Multimedia

Official trailer for Barely Lethal, (2015) has been released. The film is directed by Kyle Newman and stars, Hailee Steinfeld, Jessica Alba and Samuel L. Jackson to name a few. The film is set to be released in cinemas worldwide April 2015.

(We do not own any rights to the trailer all Copyrights remain to the original owner. Video Source: Reboot Entertainment)

Jessica Alba played the part of Princess Leia Organa in Jason Reitman’s live read of The Emperor Strikes Back in a jam packed audience in Los Angeles yesterday.